A new drinking fever for hard cider is taking over Tampa Bay taprooms. How exactly does one describe hard cider? I’m not afraid to admit it—before stepping into the cozy tasting room at St. Pete’s very own 3 Daughters Brewing, I didn’t know the difference between hard cider and sparkling apple juice.

Really, given the statistics, it’s not completely unheard of for a common American like myself to mix up these two very different beverage categories. Despite cider’s global popularity in countries like Spain, the UK and Ireland, the stateside demand for cider has only blossomed in the recent decade. This is America, after all. We love our beer almost (almost) as much as we love our children. There simply hasn’t been enough of an opening in the competitive alcohol market for much else. But with small craft breweries spreading like wildfire across the US and successfully steering hometown denizens towards the appeal of the “drink local” movement, the stage has been set for craft cider to rise as the next German lager of the new century.

3 Daughters Brewing, the familyowned brewery known around town for its lively atmosphere and first-rate drafts, plans to lead this cider revolution locked and loaded with the equipment, experience and passion necessary to do so. As I toured their facilities and gleaned an insider’s look at their two massive fermentation warehouses, I was able to watch all the moving parts in action. So began my education in the art and science (3 Daughters actually has an in-house laboratory to ensure each batch is of a consistent quality) of craft cider.

It all starts with the humble apple, harvested by hand and “scratted” (ground down) in a cider mill to produce fresh juice. The juice is poured into a fermentation tank (picture a giant steel keg—or, in the case of 3 Daughters, a 150-barrel metal monster purposed to yield 4,500 gallons at a time) and infused with a yeast strain, which adds secondary flavors and, more importantly, turns all those natural sugars into alcohol. Filtration follows the long fermentation process, leaving behind a customary apple cider baseline that’s ready to be blended with various ingredients and fruits. The result: a diverse profile of cider flavors, from artisanal amber drafts to seasonal brews of pumpkin, cinnamon and nutmeg.

From there, it’s on to canning and distribution. This begs the most important question yet—in a local market that’s just now beginning to tackle the cider craze, where do we go to get our first taste?

Hosting live music, board and bar games, trivia nights, food trucks and even weekly yoga classes, 3 Daughters Brewing is more than a family-friendly taproom—it’s an all-inclusive way to cap off your work week with the best drinking experience you’ve had in ages. The tasting room offers more than 60 house-made brew recipes on tap. Scheduled to launch their draft cider by the end of the fall season, three flavors are already lined up for their menu: Original, a slightly sweet, traditional apple taste; Key Lime, a tart, uniquely Florida blend; and Dry Hopped, using New Zealand hops for fruit flavors like plum, peach, and passion fruit.

Southern Brewing & Winemaking has a standing reputation as the choice storefront in Tampa for a complete source of beer and wine-making supplies. Their recent expansion into a family-friendly taproom has been met with tasty success—which is only natural, considering they brew and bottle all their drinks using the tools of their own trade. Already connoisseurs of beer and wine, they’ve decided to dip their toes in the draft cider trend by offering their very own featured special: Mango Orange Blossom Cider. The name itself sounds like a dream.

A Caribbean-inspired brewpub restaurant, Mad Beach Craft Brewing flaunts exciting nightlife and a menu of mouthwatering guilty pleasures. Their taproom motto: unique spins on classic pours. They’re currently serving up two cider selections to fit the bill. Their Savvy Cider is a traditional hard apple cider, brewed for an old-fashioned slamming of celebratory mugs on a wood countertop, while their key-lime blended Kalypso Cider brings a fresh zest into the mix, perfect for a beachside hangout. 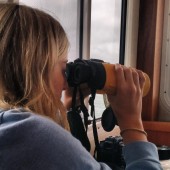 Florida-born and Florida-raised, Ariana Losch had never lived more than five miles away from the beach until she went to UCF and majored in Creative Writing (for job security purposes). Her passions include YA literature, snow cones, running out of printer ink, and pretending she can DJ.